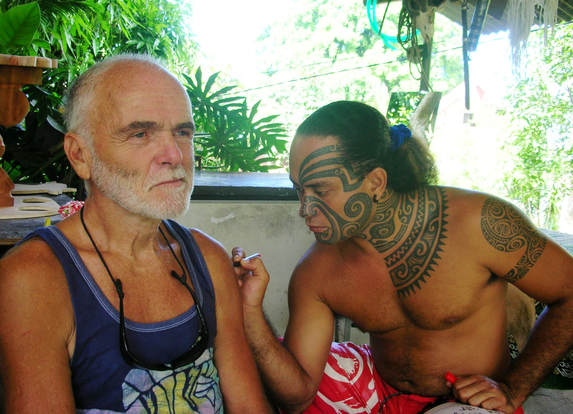 After the 2,800-mile sail from Mexico to the Marquesas Islands, to acknowledge such feats, sailors for centuries have acquired tattoos. It is part of the rite of passage upon rounding Cape Horn that you wear an earring in the ear closest to the Horn.
Having reached age sixty-nine and upon completion of this leg of our voyage, both awesome feats, I followed tradition with a tattoo in Nuca Hiva of a Marquesan turtle on my left shoulder. To the Marquesan, the turtle represents the many pathways we
explore from childhood on our way to becoming an adult. So, for $50, I found myself sitting down in a native artist’s backyard patio, waiting while he prepared his equipment. My only concern was not whether I should do this but whether my old, dried-up skin would burst into flames.
It has been almost two months of displaying my new body art at various informal social occasions, and I am happy to report the responses have ranged from silent nods to approving smiles, raised brows and—a highlight—four ladies overcome with excitement upon being given permission to touch it. I can now understand why more extensive coverage could be desirable.
In several cases, a person has come up to me and said, “Where did you get your tattoo? I got mine…” And up comes a sleeve or pant leg to reveal their signature piece. So with the decision came some new friends.
How do I personally feel about desecrating the body with this art form? I can only say that this was the time and the place for me, which was really low risk, as I am not up for a job interview or planning a new career. And finally, there is some mystique that comes with a tattoo that gives you a little more self-confidence, a little more unpredictability which isn’t easy to achieve in these latter years and overall a temporary offset to the inevitable march of time that paces us all.
It is not important to wait until you are sixty-nine years old or for a rite of passage, but in my case these were factors, and besides, Judy thinks it looks great.
​     So the next time you see a turtle, let it remind you that whatever you’re experiencing now is just a phase you’re in and the possibilities are endless.

Today was one of those days that make it into the top ten most memorable. I am trying to compose this after a large intake of spaghetti and with a group in the distance practicing their native drums, which are really moving the night air. When we pulled into Moorea yesterday, we dropped the hook in twenty feet of crystal-clear water. We were close enough to shore to warrant an anchor check, which was done with snorkel and mask, as everything can be seen from the surface in this clarity of water.
Secure in our holding ability, we headed out early the next morning in three dinghies, which included two cruiser friends with kids, one family from Austria (Lawur) the other from Los Angeles (Blue Sky). Our destination was a sandy shoal about four miles along the inner reef barrier, a famous gathering place for rays. When we arrived the excitement was immediate, as the sandy bottom was alive with huge rays, not of the manta type but the more deadly and feared stingrays. These babies were ranging from four to five feet in diameter and had tails of equal length that cut wide swaths over the sandy bottom. Robert, our Austrian friend, was in the water immediately with food in hand and was soon surrounded. Eventually everyone was brave enough to get in the water with about twenty of these deadly fellows.
The water was only four feet deep. The rays would swim to the surface and put their big undulating arms around us, and their wide bedroom eyes seemed to say, “Welcome to my world. What did you bring me to eat?” We had a variety of foods but they really liked our sardines. There was a trick to feeding them—I would take a pinch of sardine and let it go under a protruding front lip pressed against my chest, the food would disappear. A few fish tried to get into the act and take food from my hand, but the really big show were the rays—makes sense to me. With one hand distributing the goods I could, with my other hand, stroke their velvety-soft dorsal sides. And yes, these were stingrays, verified with protruding sting apparatus in place. Evidently the use of such an impressive defensive weapon is a learned or voluntary response, so for our feeding party there was nothing to fear except fear itself and, thankfully, none of these new friends got upset when the food was gone.
Judy may have saved us all when she noticed some of the rays were settling out on the bottom and beginning to partially cover themselves with sand. They would be easy to step on, which would not be good. It was time to get out of the water. We had debated about stopping at Moorea for the rays, as these things can be overhyped and the trip may have turned out to be nothing more than feeding some fish, nothing special. Not so today. As I mentioned, this event moved into the top ten life experiences for this cruiser. I would have expected this behavior from the more docile manta rays, but for the deadly stingray? Make that deadly only if a human presents a threat.
​    I may have been premature in selecting the turtle tattoo for my rite of passage, but then there is nothing on my right shoulder…but that would be putting a ray on Ray— probably not a good idea.
Amazon