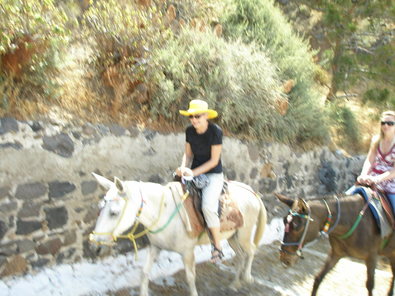 “Mule rides up the steep cliff to get to Santorini are way too dangerous, and I have seen people fall off and break a leg, so I highly recommend the tram.”
These words from the morning orientation on the Princess were fresh in my mind as we approached the long line of fellow passengers waiting for the tram. We fell into line and prepared to make the best of it. An old fellow was shouting something about only ten euros and pointing to the loading ramp for the mule ride up the cliff. Nobody was paying him any attention.
As the line for the tram moved slowly along, I recalled my experience with horses and mules in the Park Service and Forest Service and how I had always had complete confidence in both, especially the mules, which were smarter and more agile on narrow, steep trails—the line moved on. I knew Judy had limited riding experience; her sister had spent many summers in Montana on a cattle ranch, but that was years ago, and even she was not interested in renewing her riding skills this day—the line crept on. Judy had said earlier there was no way she would take the mule ride after hearing that legs had been broken, but then my mouth took over for my brain.
I said almost apologetically, “Do you want to take the mule ride?”
She replied quietly, with a smile, “Yes.”
I couldn’t believe it, but then she is always full of surprises. We said our goodbyes, agreed to meet our fellow travelers at the top, and headed to the loading ramp. It was a big operation, maybe twenty-five mules on the trail, another twenty-five in the holding area—supposedly a forty-five-minute ride to the top. The scene was chaotic and I thought Judy was going to change her mind, so we did our usual dance for life threatening situations where I said, “Looks okay.”
It was a short line, and ready or not, we were mounting up with handlers holding our mules. I thought she was getting on, but as I was led away, I turned to see her still standing on the ramp. I thought she had lost her nerve. I tried to turn my mule, which did not want to go back.
“You must go on,” the handler directed.
“I need to wait for Madame,” I replied.
“Madame is coming,” he insisted.
I pointed and yelled, “No, she is not coming. I can see her with her yellow hat. She is still on the ramp.”
He kept pulling my mule forward as I kept trying to turn around. Farther up the trail and free of the handlers, I did turn around and was heading back but was stopped again, this time by an angry handler. I tried bribery, handing him an extra ten euros to let me go back, but no way was that going to happen, and he kept the ten. He was yelling at me in Greek and I was yelling in English and some Spanish, which seemed to apply—almost an international incident.
I was mainly angry with myself for getting ahead of Judy and knew she felt I had abandoned her to deal with all of this “new stuff”—certain she was going back to join her sister in the tram line. I was stopped on the trail, letting other riders pass, feeling badly. Suddenly, from around the bend on the trail below came a white mule—rider with a yellow hat and, yes, unbelievable, there she was and she was hauling.
As I sat there on my steed, she raced by with a big smile, shouting, “Blanco! Blanco!”
I couldn’t believe it and was too stunned to take a picture.
I tried to catch up, but at the top she was waiting for me.
“What happened?” I asked. “I thought you were right behind me and then you took so long to get going.”
“I wanted to ride the pretty white one,” she answered.
I hadn’t thought of that, but it made perfect sense.
Evidently, it was being reserved for heavy people, and she had to argue with the men to get it. Her white mule liked the shade and would pass others to get there first—I said mules were smart.
One of the handlers saw us talking afterward and came over, smiling, shaking his head, and said, “So this is your Madame, you are just like Madame, you two belong together!”
I had to agree.

Note: We dubbed this the Champagne Trail, so named because we spent an afternoon at a breathtaking, cliff-side restaurant, table for two, overlooking the bay, drinking champagne. The next morning we could not remember exactly how we got back to the boat, but we are sure it was not via Blanco.