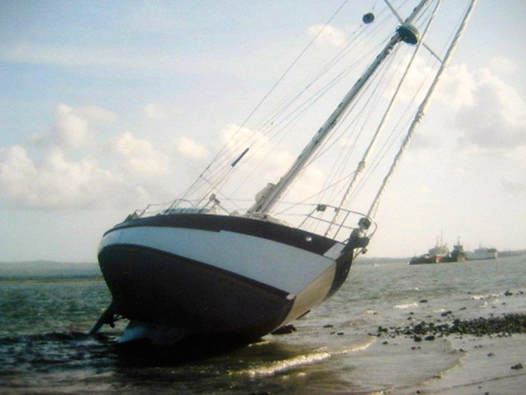 Upon arrival in Benoa Harbor, a place alive with tourist activities, we headed for the channel to the marina. Partially distracted by the activities, partially less attentive after our strenuous passage up the challenging selat, and partially assuming the channel markers were not for real and forgetting that the guidebook said to give these markers plenty of clearance, we concluded all of this miscalculation with a sudden grounding. We tried desperately to back off the shoal, but no luck; the receding tide secured our capture.
Alex, a native boy in his small skiff, was the first to notice our situation and quickly realized we needed more than his help. He said he would contact the coast guard. Shortly afterward, a power boat with a faded orange strip like the US coast guard’s and the captain and crew out of uniform made a valiant effort to pull the Nereid off the shoal. They eventually gave up, leaving us with the reminder to set our anchors to prevent the tide from moving the boat further onto the shoal.
The Nereid took her misfortune like the true lady she is, and with the receding water, she slowly healed over. She came to rest on her port side as the tide went out, lying down easily as if to relax—no damage. She looked like a shipwreck and quickly became a tour-boat attraction and photo op. Tourists lined the rails with their cameras, seemingly enjoying our predicament.
​      It was a very sad and depressing moment, along with the inconvenience. Life inside the boat was like playing on a jungle gym, trying to maintain a vertical position on a forty-five-degree surface. There was concern that any movement would tip the boat further over onto the mast, but the 7,700 pounds of ballast did its job. I took some preventative measures, closing all the seacocks and the shutoff valve for the upside water tank. Judy decided to do some reading; I did some review of a book titled Aground and the Technique of Kedging Off.
I managed to get out and take some pictures and make a few jokes to myself to offset the stress. If I had planned better, I could have done some bottom painting, like they did in the old days.
I hailed a small skiff with a father and son who were fishing. They came over and we reset the stern anchor into deeper water, as I had only carried it as deep as I could wade. They then agreed to reset the bow anchor into deeper water. I dove down and pulled it up, and the son placed it on the deck of their boat. When the father saw the size of the anchor, he changed his mind; he was afraid it would hurt his boat. The son, very respectfully and with a helpless smile, said it was his father’s boat and there was nothing he could do. I couldn’t argue, but I was impressed with the respect the teenage son had for his father’s decision, even though he didn’t agree.
He handed me back the anchor and said goodbye, and they backed away. Fortunately, I was still in the water up to my neck, and the added thirty-five pounds made it relatively easy to dive down and reset the anchor.
​     We waited, and as the water depth returned, the anchors held and the Nereid slowly regained her respectable vertical position. About midnight, she was set free. It was time to start the engine, back off the shoal and head for deeper water while retrieving the two anchors. The whole exercise went just like the book described, so we did good. It was then time to find an anchoring place among the many fishing boats and tour boats silhouetted in the dark. After several tries, we found a space with good holding. It had been a long day and we were ready for sleep.

Note: I initially thought the grounding to have been the result of a combination of distractions and poorly placed channel markers. Some weeks later, while enjoying the sunset and an adult beverage with my first mate, she mentioned that instead of following her captain’s directions to maintain the present position while the captain went below deck, she had decided the red and green buoys off the starboard bow were guides to the marina. Taking this direct route between the markers had resulted in the grounding of the Nereid.   There has been no lashing or reassignment of duties, but the captain will be more vigilant and never take his best mate for granted—she definitely bears watching.