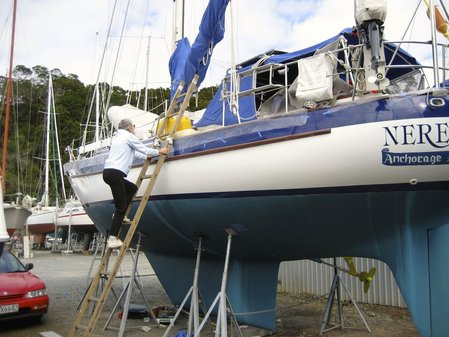 We spent two months in New Zealand living on our boat in Ashby’s Boat Yard, or as boaters say, “on the hard.”
Life on the hard in a boat yard has some advantages. There is no movement from the tidal flux, changing wind conditions or boat traffic. Instead, you are greeted every morning with the white noise of someone sanding. It’s a sound similar to rubbing your hands together, and in the boat yard, it is always going on. It can be a pleasant sound, knowing work is being done somewhere by someone, but it’s also a gentle reminder that there is work to do on your own boat.
​     Access to your boat on the hard is via a ladder secured to the deck rail. Climbing the ladder is good physical conditioning, and placing your feet properly on the ladder is a good coordination exercise. Extra care was required each morning as I descended the ladder to ground level with a bucket of materials collected during the night. It was always my concern that one slip could bring me down, with the bucket’s contents meeting me at the end of my fall. I always knew that if I started to fall, my first order of business would be to jettison the bucket as far as possible from the impending crash zone. I am happy to report that this contingency measure was never implemented.
Upon a successful arrival at ground zero, it was always a moment of truth walking with the bucket, a long hundred yards to the designated dump site. I seldom made this trip before the boat yard was active with workers. While I tried to make the most of my journey by greeting others, I knew they were aware of my bucket.
The only other hazard to yard life is the remote possibility of your boat falling off the supporting jack stands. During a record rainfall of seventeen inches in twenty-four hours, there was in the night a loud crashing sound. I sprang from by bed to see what was the matter and noticed nothing, then sprang back into bed with the news to Judy that nothing serious had happened. It wasn’t until the next morning that Judy said to me, “Raymond, what is this?” Her addressing me as Raymond and standing in the cockpit with hands on her hips—these are not good signs. I looked out, and wow; the sixty-foot Italian yacht placed diagonally from our boat had fallen over and just missed the Nereid. It was now lying on its side like a beached whale. Not a pretty sight. I immediately amended my report.
​      Life on the hard is not hard if you are careful, watch your step and make accurate observations. 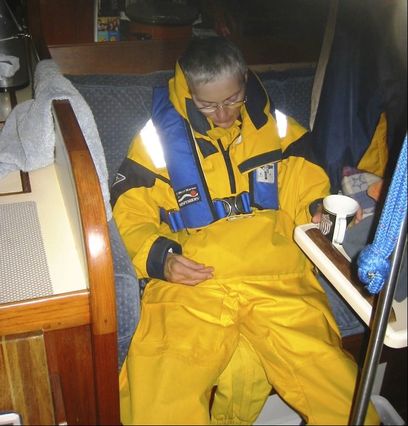 Australia, we will miss you: the “yeah yeahs,” the long-drawn-out “ummmphs” in response to someone saying something interesting, the expression “No worries,” a prime minister who speaks fluent Chinese and Cantonese, hamburgers with beetroot and a fried egg, all the words ending in “ie”—footie (football), littlies (children), and sunnies (sun glasses)—with mates all around, great songsters like the kookaburra and the high-energy lorikeets, Aussie TV with David Attenborough and the occasional surprise feature like “Designing the Perfect Penis.” The most memorable TV commercial was “Stiff and Stiff Again,” two guys playing the piano without using their hands, advertising erectile dysfunction correction. We will miss the crocs; the latest newsmaker was taking horses on an outback ranch. Special friends Bill and Lyda, John and Julie, John and Tres, Peter the lockmaster, Nario, Alison and Paddy, Bill and Kerryn, Ian and Wendy, Claus, Claire and Errol, Lex and Joann and that dynamite teenager Ali—all will be missed.
Our departure from Darwin was a low-key affair, no fanfare; last year, after three unsuccessful attempts, we learned to only inform a few close friends of our intentions, thus minimizing the explanations if we had to return. The winds had been light for the last month, and we were worried there was not going to be enough wind to sail, making
us depend on the engine, our “iron jenny.” We needed to get going to make our annual visit to San Francisco by late August, so we said our goodbyes and motored out of the harbor. We fueled up at Cullen Bay and were on our way by 2:00 p.m. There were only light winds the first day, and we motored ten hours; the second day was more of the same, only we motored for twenty hours.
Day three and about 200 miles out, the weather changed quickly to a new ball game. The SE monsoon that carries the rallies and other boats into Indonesia began its three-month blow. But instead of leveling off at a nice 20 knots, our ideal sailing conditions, it just kept coming and coming and didn’t peak until 50 knots. It was then that some of our latest and most expensive equipment began to fail. The new laptop decided it didn’t like the COM port setup, and after trying to get the navigation program up and running, it was back to the backup computer. Next to go and equally important was the new $6,000 Raymarine autopilot, which was replacing the troublesome Alpha autopilot after a record three trips to the factory for repairs. The Raymarine might have handled the forces of the new weather system, except the installation had not been done correctly, resulting in the rudder bracket slipping to hardover port.
Judy said she didn’t care what broke, what didn’t work or how hard the wind blew, she did not want to go back. After hand steering for two hours in these high wind conditions, it was time to take a break, and we did the magical hove-to maneuver that is to park the boat at sea. The force of a back-winded staysail is countered by locking the rudder in the opposite direction, positioning the keel to de-energize the swells, resulting in a relatively restful condition. We went below, and after our naps, the wind screaming, we played cards and did some reading, always checking for possible boat traffic. Judy read an entire book and did the cooking, with some teamwork as needed to open cupboards and fridge doors. With our boat speed reduced now to about 1 knot, we still did about thirty miles a day.
​    The boat was tossed around in these conditions, but we adjusted. We slept in the salon, the windward bunk fitted with a safety net to keep us from going to the floor. The stove was in full gimbaled swing, the operator with a butt strap to stay in the area. The nav station required the use of the seat belt, once believed to be unimportant. Inside the boat, we were like primates moving through the jungle canopy using the overhead handrails. The most challenging moments were on the head—once inside, close the door and wedge yourself with your elbows and knees to keep from flying out before finished.
One good thing about bad weather is that it can’t last, and we were certain it would calm down the next day. We were assured by our radio contacts in Darwin that this kind of condition was always going to let up the next day. Well, it was a record blow, and we were hove-to for four days before the winds dropped to a manageable 35 knots, at which we could set the staysail and let the Monitor windvane do the steering.
Anyway, it took us nine days to make our first stop, Rindja Island, Komodo dragon country.
AMAZON​