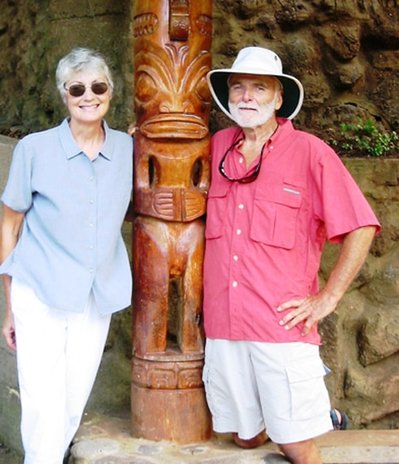 
These short stories were written shortly after each event, or at least roughed out. A couple of years later, while drafting the final document, it was harder to believe we did what we did. With time, that feeling of amazement increased as the details began to fade. The important point was we had done it, and while entering the fourth and final quarter of the big game. We had some medical issues, but we were still relatively strong and healthy. Equally important was that we had purchased a proven-seaworthy boat that covered our mistakes in what was to become an ongoing learning experience.
We also learned more about each other and ourselves. I still can’t believe how my lovely first mate stepped up when needed most. Don’t judge the capabilities of your mate before such an undertaking. These revelations about each other were ongoing and priceless.
​     Almost equally important was our realization that we are all in this together, only with different starting points in life. Irrespective of our starting points, we all have the same hopes and dreams. The little girl holding her doll while she studied us, the little boy clinging to his favorite toy, the proud parents nodding their approval, the sounds of kids playing in the schoolyard.
Cultural differences were important and amazing. Wherever we went ashore and traveled around, we were greeted with warmth and enthusiasm by the people. The wide range of economic success, measured by the accumulation of stuff, seemed to correlate inversely with happiness and enjoyment of life. A good lesson and a growing concern for our Western culture.
Many have asked us, “What was the highlight of your trip?”
Not an easy question to answer. Judy has several but always includes the time, after a quiet passage on a moonlit night, we approached a cove off Bora Bora as the sun was just breaking over the surrounding mountains. For me, surprisingly, it was while recovering from back surgery at a hospital in Malaysia at Christmas time.
Good news about getting older is that the accompanying lack of energy makes it easier to let the spirit of adventure slip away. We will not be buying another boat, but there is no doubt we did the right thing by selling our house and buying the Nereid. We also have a great story for the kids and grandkids. Our hope is that others will find some inspiration in what we did and maybe take a chance. It’s not too late.
​     Wishing you fair winds and following seas in whatever you do.