​     Ray Emerson is a retired marine biologist. Most of his professional life has been in education, as a teacher and researcher. The day we sailed out of the harbor at Puerto Vallarta, Mexico to cross the Pacific Ocean alone, just the two of us, was one of the most exciting days of my life, except of course, as Judy reminded me, for our wedding day and the birth of our two children. Eight years after selling our house and 130 stories later, we sold our boat in Thailand and returned to our terrestrial lifestyle. 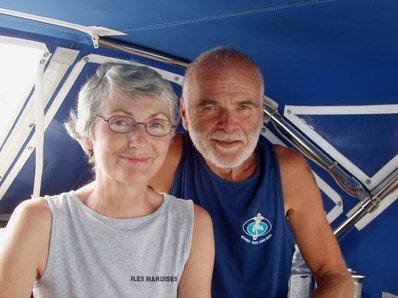 In The Beginning
​
​       The idea for this sailing adventure was planted with Tinkerbelle, a book by Robert Manry about a solo voyage across the Atlantic Ocean in a thirteen-and-a-half-foot sailboat, which I read in 1967. That seed lay dormant for thirty-six years, until the one day when I came home from my job as a marine biologist.
“Raymond,” my darling wife, Judy, said, “I have spent twenty-five years here. This is my last winter in Alaska. I am leaving.” She paused. “I hope you will come with me.”
​        I considered her words and, after a few moments, said, “Yes.” I then asked, “Would you live on a sailboat?” She quietly considered my question then replied, “Yes.”
It was as simple as that—the rest is history.
​       It was soon after this conversation, in December 2002, that we purchased a fortyfoot sailboat in Bellingham, Washington, and moved from a 3,200-square-foot home to a space forty feet by twelve feet that tapered at each end to a useable space of about 200 square feet. Much of the stuff we had accumulated over the years was dispersed like it would be at an estate sale, as if someone had died. In a sense, we had died, but as the stuff went away we began to feel reborn.
​
Use for e-book formats other than Kindle